Lightsounds proudly supports the inaugural Musica Copa; Australia’s first and only charitable 5-aside football tournament for the music industry. 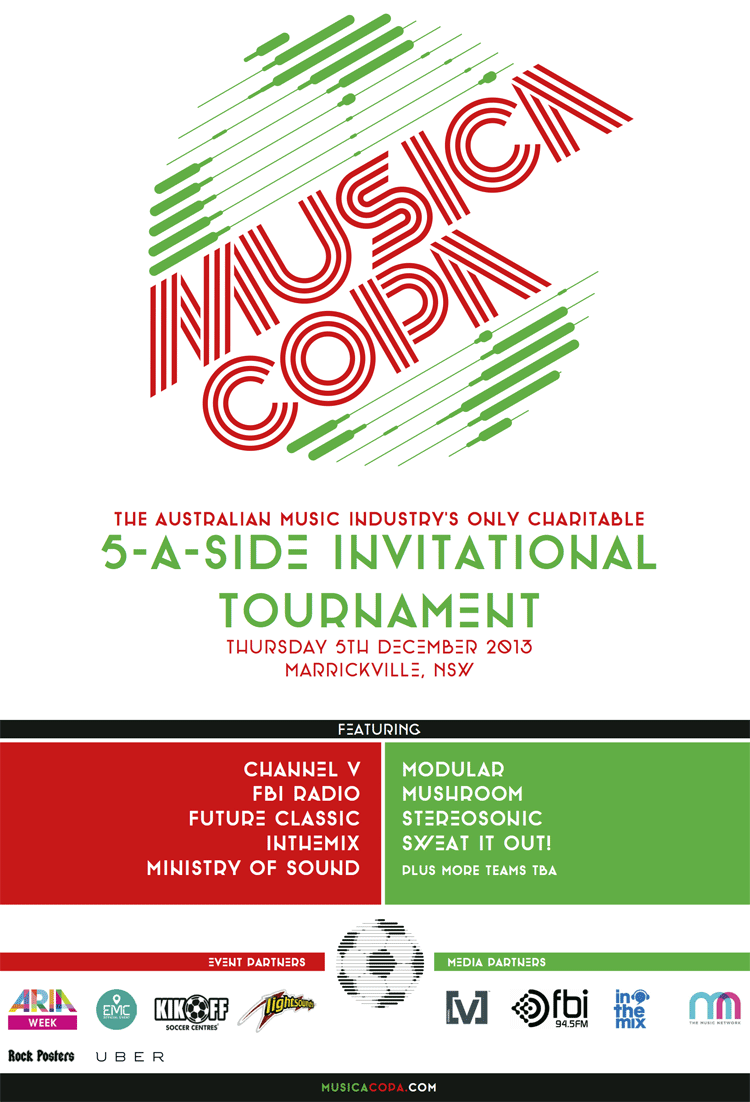 Some of the biggest names in dance music have today been announced on the team-sheet for Australia’s first official 5-a-side football tournament for the music industry, the inaugural Música Copa.

Officially partnered with ARIA Week and the Electronic Music Conference (EMC), Música Copa will take place on Thursday 5th December – in between the two weekends of Stereosonic at Marrickville’s industrial KIKOFF complex.
The tournament will see touring artists, TV & radio personalities, label representatives and industry legends fire up old rivalries on and off the pitch. Each team will battle it out to win the bumper cash prize for their nominated charity, plus exclusive bragging rights for the next 12 months!

"With the Socceroos qualifying for next year’s football World Cup and the Brazilian buzz set to grip the nation, it seemed like the right time to put together a friendly, footy-focused industry event, all for a good cause" note tournament organisers Paul Stix and Martin Novosel.
Players and spectators will be able to congratulate and commiserate their music industry peers, followed by some well-deserved ice-cold beers and a Portuguese barbeque in the state of the art, outdoor setting. It wouldn’t be a music industry event if the after-party celebrations weren’t soundtracked by some of the many DJ’s on hand, alongside some very special guests.

Teams from Stereosonic, Modular, Future Classic, Ministry of Sound and Sweat It Out will be holding it down for the electronic community, with Channel V, FBi Radio, inthemix and the Mushroom Group set to flex their industry muscle and roll out the big guns in a quest to win the elusive championship trophy.
Tyrone from ARIA chart topping Rufus will be playing on the Sweat It Out team and commented; "Last time I played indoor soccer was when I was 12 in Sweden…now I’m twice the age…with half the skill. So probably triple the entertainment."

A host of notable artists have already been confirmed in the first round announcement, with the likes of Van She, Canyons, What So Not, Rufus, Movement, Dan Single, Yolanda Be Cool and Danny Clayton (captaining the Channel V team) taking up the gauntlet. Many more players will be confirmed in the coming weeks, and with Sydney awash with international talent at the time of the competition, the team-sheet is set to read like a fantasy festival line-up.